Update: This version of the DJI Phantom line is now outdated. Since the release of the Phantom 2 Vision+, DJI has released newer versions of this quadcopter in the Phantom 3 and the Phantom 4.

Although it carries a relatively hefty price tag of about $1000, the Phantom 2 Vision+ sets the industry standard in many different categories. Most notably, live HD video streams right from the camera straight to your smart phone. Other drones are capable of this same type of video streaming, but they require complicated set up procedures. Nothing compares to the ease-of-use, reliability, and high quality camera system of the DJI Phantom 2 Vision+. Every DJI competitor is desperately trying to replicate what DJI has accomplished here.

Yes, learning how to fly on the Hubsan X4 107D was a formative experience that will always be cherished. And earning our high-altitude wings on the Parrot.AR Drone 2.0 was a blast. But there comes a point in every droner’s life when it’s time for  to hang up the training wheels and run with big dogs. Drone big or go home.

Here at Drone Lifestyle, we like to refer to the Phantom 2 Vision+ as the Cadillac of Drones. With unparalleled flight time, handling, and filming capabilities, it is hard to beat the Phantom 2 Vision+. RTF (Ready-to-Fly) and easy to set up, this quadcopter is very simple to get up in the air. As soon as you beat the traffic on the way home from work and rip through the shipping packaging, you can be up and flying in just a few simple steps, capturing breathtaking footage you thought was limited to only the pros.

Caution: if you have never flown before, train on the Hubsan X4 107D first! 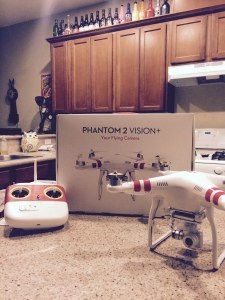 For those of you who have already purchased this quadcopter, and are looking for information on how to quickly get in the air, check out our quick start guide at the bottom of this article. DJI’s manual is a little all over the place so we simplified it down into a few easy steps, although we recommend still familiarizing yourself with DJI’s documentation. Once you do get in the air, drop a comment below letting us know how you’re liking it. We would love to hear how it’s going. For those of you here for the full DJI Phantom 2 Vision Plus review, keep reading…

This is the nicest handling quadcopter we have yet to fly. It simply listens to you: it doesn’t jerk, it isn’t sporadic, it just glides…. forward, backward, left, right. It’s like a symphony up there and you’re the conductor. Move the controller quickly and it responds quickly, but all in a controlled and orderly fashion… beautiful.

Grab your binoculars kids, the the DJI Phantom 2 Vision+ will be out-of-sight and in the clouds before you know it. If you are within city limits, the Phantom’s navigation system will put a ceiling at 400 ft (the FAA designated height limit), but in other places it can fly as high as a thousand feet.

The Phantom flies so high so fast that we highly recommend enabling the ‘Auto-Return Home’ feature which tells the Phantom 2 Vision+ to return to the launch point before it runs out of battery. The fact that this is actually a concern is insane… 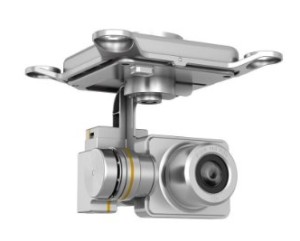 The DJI manufactured camera that comes standard with the Phantom 2 Vision+ is comparable to a Go Pro Hero 3+, capable of HD video (1080/p30 or 1080/60i) and 14 MegaPixel still shots. This high quality camera is attached to a 3 axis gimbal which enables you to get perfectly stabilized footage. The seamless gimbal and camera integration delivers next level footage.

Here we are testing out the camera with a quick golf course ‘dronie.’ This was our first flight with our Phantom 2 Vision+.

Many quadcopters rely on radio waves and WiFi signals to transmit directions from the controller to the quadcopter itself. That’s all well and good, but we live in the 21st century, so we may as well start flying like it. We are an advanced civilization with advanced tools like GPS. And with the DJI Phantom 2 Vision+ being an ahead-of-the-curve quadcopter, it’s only natural that the Phantom 2 Vision+ uses GPS, unlocking capabilities that other pilots could only dream of…

The beauty of the Phantom 2 Vision+ is in its simplicity. The box doesn’t include as much as other quadcopter kits, but it doesn’t need to. When opening the box you will first see the Phantom and the transmitter (4AA batteries included). Slide the quadcopter out of the box and you will notice the 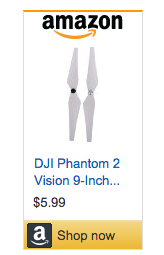 gimbal and camera are set up and all ready to go. The kit also includes a Lithium Polymer battery, a battery charger, two sets of propellers (8), a few extra parts for the gimbal attachment, a tool kit, and a range extender with a mini USB charger. This mini USB charger also doubles as a connector from your gimbal to your computer allowing you to upload your footage with no hassle at all.

We highly recommend purchasing an extra battery. A 20 minute flight time may sound long, but it’s not! We used to drive out to Red Rock Canyon, which took us about an hour roundtrip. Adventures like these make a 20 minute limit incredibly frustrating. Luckily, there are some great deals on Amazon that include an additional battery.

It’s hard to badmouth the DJI Phantom 2 Vision+ because it’s probably the most user friendly quadcopter that you are going to find right now. However, consumer drones and quadcopters are still in their infancy, and even with this elite drone we’ve run into a few problems. The first issue came across concerned the gimbal. In between flying, and uploading some video, something went wrong with the very sensitive machinery. No crashes or anything, and the gimbal began throwing malfunctioning errors! After many hours of digging through DJI forums, we found the answer… a tiny screw needed to be tightened behind a protective housing of the gimbal. So simple, yet so frustrating to find! Be prepared to tinker and perform minor fixes on your new toy, as waiting for DJI repairs can take a few weeks. And we find it hard to wait that long! We’d rather be flying!

And yes, even though the DJI Phantom 2 Vision+ is equipped with an incredible range extender and GPS capabilities, we routinely find ourselves running into connectivity issues. A lost connection isn’t the end of the world in Phantom land because it simply returns to home, but it is a pain. One minute you could be sailing through the air grabbing the footage of a lifetime, and the next a lost connection will have you on your way home. This really only becomes an issue at higher altitudes and the upper boundaries of the communication field, but it does happen from time to time.

Wrap Up of the DJI Phantom 2 Vision+ Review

The DJI Phantom is a beautiful piece of technology. It’s easily our favorite quadcopter on the market. The only thing is the manual is terrible! I think DJI would even agree with us on this one. It’s hard to understand and the writers did not go into enough detail, so we decided to create one for you! This will allow you get your quadcopter up in the air as soon as possible with little frustration.

(Looking for a great training aid? The Hubsan X4 is a cheap quad that handles much like the Phantom 2. If you can handle this thing indoors then, you will be a much more prepared pilot when it comes to flying the Phantom 2 for real.)

The standard  DJI Phantom 2 Vision+ kit includes the quadcopter, two sets of propellers, a lens cap (make sure to hold onto this), a rechargeable battery and a charger, usb connector, spare parts for the gimbal, a tool set, and a transmitter. A range extender and phone clip come attached to the transmitter.

First things first: get the battery and range extender on a charger! It takes about an hour to an hour and a half to get a full battery charge. You can setup everything else in the meantime. 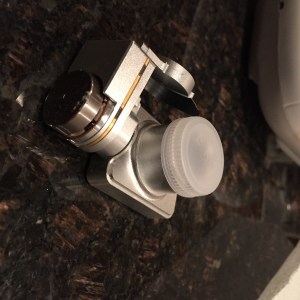 Whenever you are not flying make sure you keep the lens cap on the camera. One little scratch could affect the video quality. If you ever lose the cap for any reason, don’t freak out. We came up with a simple household remedy! Just dry off a water bottle cap and put it over the camera lens. Then just use a little tape to keep it in place, and voilà!

While your battery and range extender charge you should take care of a few things:

Download DJI Vision App through the iTunes or Android store

If you want to make your range extender SSID easier to remember you can change the name. When you go to setup the wifi you will see its named something like Phantom_108563. You can change it to whatever you want, such as “Mike’s Phantom 2 Vison+”. This part is totally optional. 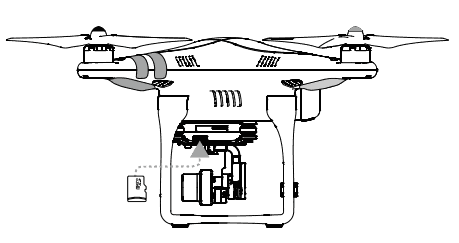 In order to save your video and photos you need to insert the mini SD card into the card slot located on the gimbal. Make sure it clicks into place. You need to remove the lens cap as well.

Now that you have a full battery charge and everything is set up on your phone, you’re ready to take flight! It’s important to pick a good location, so avoid areas heavily populated with people, trees, light posts, etc.

Turning on the DJI Phantom 2 Vision+ 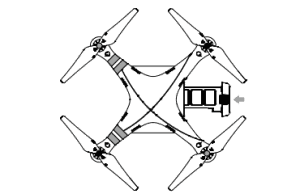 Slide the battery into place. You should hear it lock in. Press the button once, let go, and then hold the button down for 2 seconds. The Phantom should give off a heavily noise and perform its mini light show. This display will send chills down your spine.

If at any point you don’t see the correct lighting listed above… simply turn off your Phantom, range extender, and transmitter. Then start from the beginning. Never start flying if the LED light indicates a fail!

Once you see the normal LED light you are ready to fly. Finally! 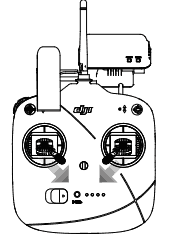 This part may seem a little nerve wracking at first, but don’t panic. Yes, you do have to be very careful during this step because you want to avoid tipping your Phantom 2 Vision+. Just take it easy and slow. You’ll be fine! 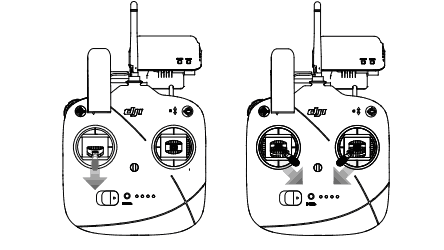 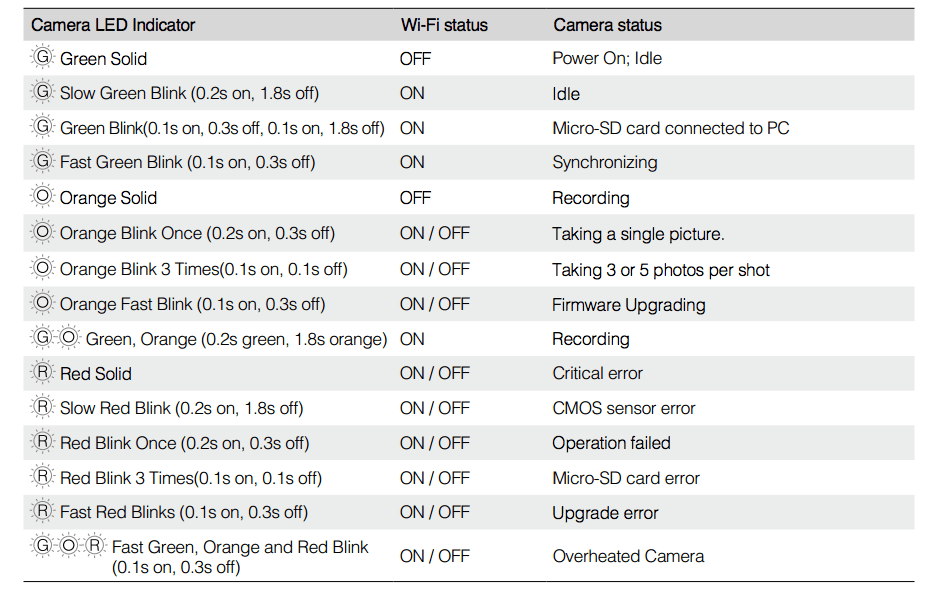